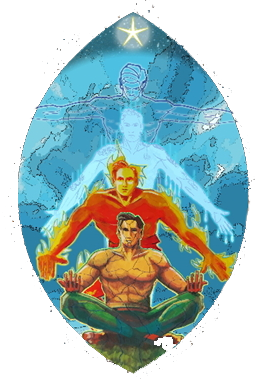 Every Craft and Royal Arch Tracing Board depicts the same ideas, but from a different perspective.

The First Degree Tracing Board gives us a view of the macrocosm and our place both within and as a part of It. Our limited physical existence and the various phases of spiritual development are represented by Ashlars, and the work of remaking our-selfs’ is symbolised by the tools and plans.

The Great Secret is plainly on view to those who have the Love to see clearly and the Strength to ascend into unity with the Light of Wisdom.
Read The Article

Every Craft and Royal Arch Tracing Board depicts the same ideas, but from a different perspective.

The Second Degree Tracing Board shows us the crossing where the physical world and spiritual Truth meet, the Point where the without becomes within. We can see a retrospect and prospect of our voyage to Knowledge; the reborn Seed ripening into an understanding of the Life which is at the Centre of us all and at once the mystery of Nature’s Grand Circle.

The Great Secret awaits all of us who have the Knowledge and inner Wisdom to Pass the Wardens, the Courage to enter the apparent darkness and climb the winding staircase, and then to open our-selfs to the enlightenment that all of us are the microcosm, both mirror and Plan of Creation.

Read The Article
Every Craft and Royal Arch Tracing Board depicts the same ideas, but from a different perspective.

The Third Degree Tracing Board shows us the inevitable point of transition between the physical and spiritual, from the finite to the eternal. Things of the Earth, mere physical labour and its results are transient, conjured from dust as mountains from sand and returned by Time to the shore of the Eternal Waters from which we are all sprung.

The Great Secret lays beyond the deepest shadow where those who have had the Fortitude to overcome terror, the Prudence to choose Truth and the Love to transcend mere self shall find their Hope rewarded in the Illumination of the Bright Morning Star that brings evergreen Life.

Read The Article
One of the more familiar tracing board artists was John Harris and it is out of respect for his interpretation of the third degree that we created this board.
The Mark degree bought The “Mark” portion of the title of this degree takes its name from the practice of the stonemason appending his unique mark on his work to identify it, either for the purpose of subsequent payment or simply for posterity or as a matter of pride in his work, a practice which has existed from time immemorial; cathedrals and other prominent buildings all over the world carry the marks of the men who built them which can still be seen quite clearly on masonry which is over a thousand years old.
Every Craft and Royal Arch Tracing Board depicts the same things, but from a different perspective.

The Royal Arch Tracing Board shows us that when we have found the Key to liberate our-selfs we can all make the Journey from the gloom of Babylon to the gleam of Moriah. Sojourning along The Way we must become rulers of our-selfs and clear the quotidian rubble of existence so that we can descend within to the Great Secret and by finding it be Exalted beyond.

When you know this you know enough: each of us is the Compass of both Points on the Line between Centre and Circumference, We are the Colours of the Rainbow and the Star Whites, We are the Celestial Glow and the Inner Lights, We are One.

The Knight Templar board is directly based upon a board found in the first Lodge of Ireland, Lodge No.1, Tuckey Street, County Cork.

Tuckey Street is also home to The Royal Arch Chapter No.1 and provides the earliest reference to Royal Arch masonry…According to Lodge No. 21's records, the “Royal Arch” was carried in a procession by “two excellent Masons” through Youghal, Ireland, on 27 December 1743.

Tuckey Street is also home of The Order of The Temple, Mourne Preceptory, No. 1.

The earliest recorded minute in the world of the Knights Templar degree being worked is from the minutes of the first meeting of an Irish Royal Arch Lodge on the 20th August 1769.
The Tracing Board of The Centre is based upon a sketch by masonic author and founder of The Lodge of Living Stones No.4957, Walter Leslie Wilmshurst.
The Lodge was formed in 1927 with the specific purpose of promoting a deeper understanding of the teachings of Craft Freemasonry, including the Royal Arch.
Wilmshurst was a modern Christian mystic as he frequently indicated in his writings.

For instance he wrote:
'At the centre of ourselves, deeper than any dissecting knife can reach or than any physiological investigation can fathom, lies buried the "vital and immortal principle" the "glimmering ray" that affiliates us to the Divine Centre of all life.' His prime purpose was to achieve union with God through Christ.
The 1517 Jewel, One face of the jewel contains Royal Arch symbolism making it the oldest Royal Arch artifact in the world. The opposite face is inscribed with Craft symbolism.

One of these symbols is a true 'lost symbol' of Freemasonry and illustrates the true meaning of the 'all seeing eye.'
‟Withdraw from Freemasonry its symbolism and you take from the body its soul, leaving behind nothing but a lifeless mass of effete matter, fitted only for a rapid decay.‟
Albert G. Mackey. 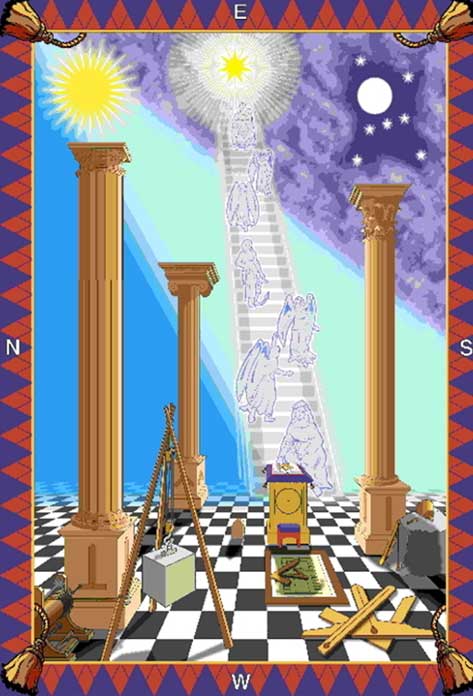 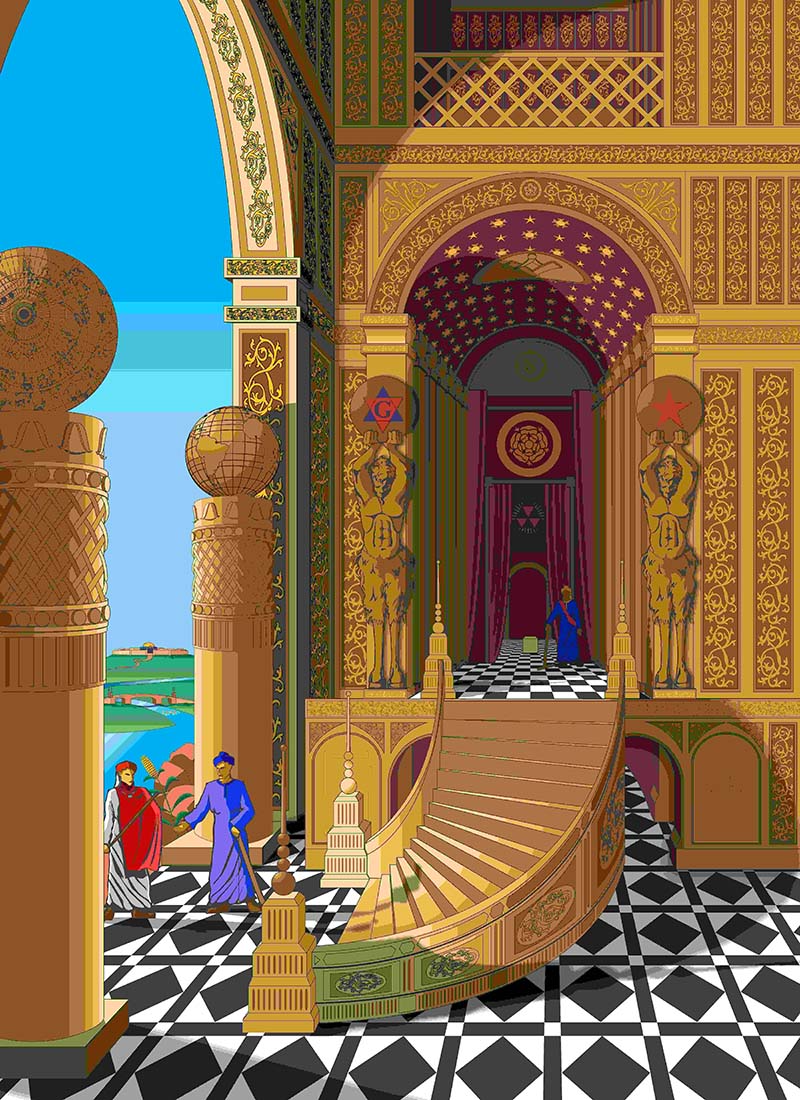 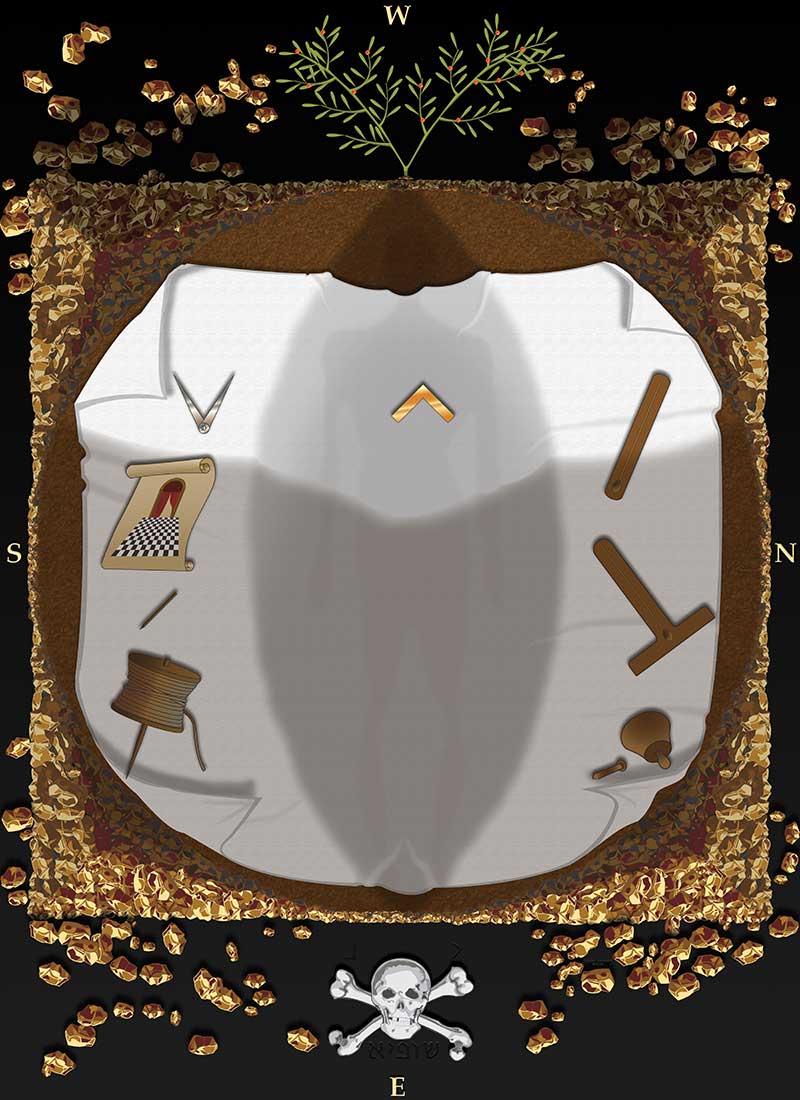 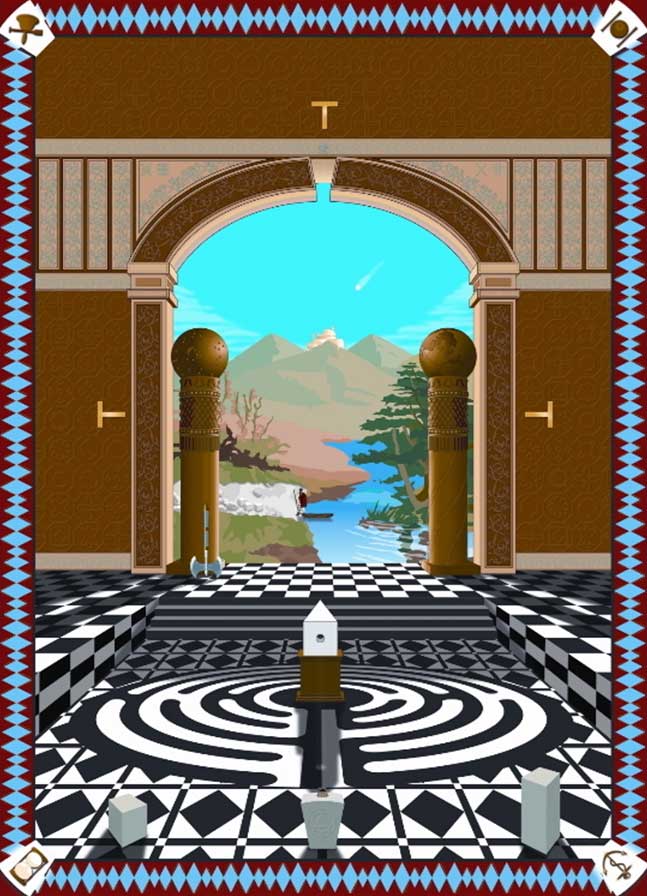 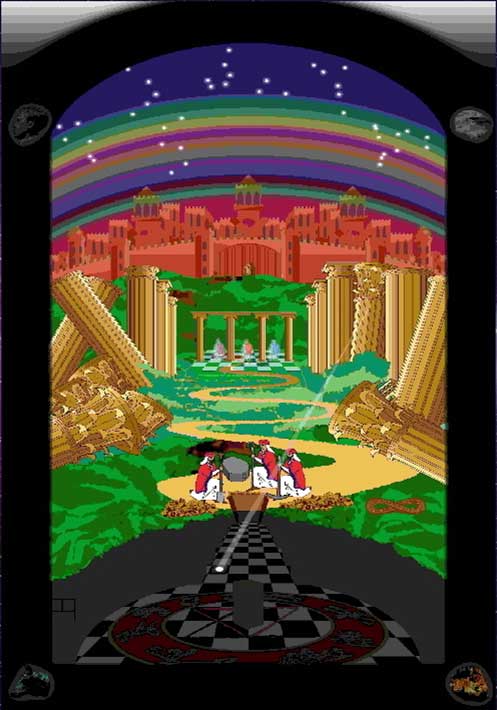 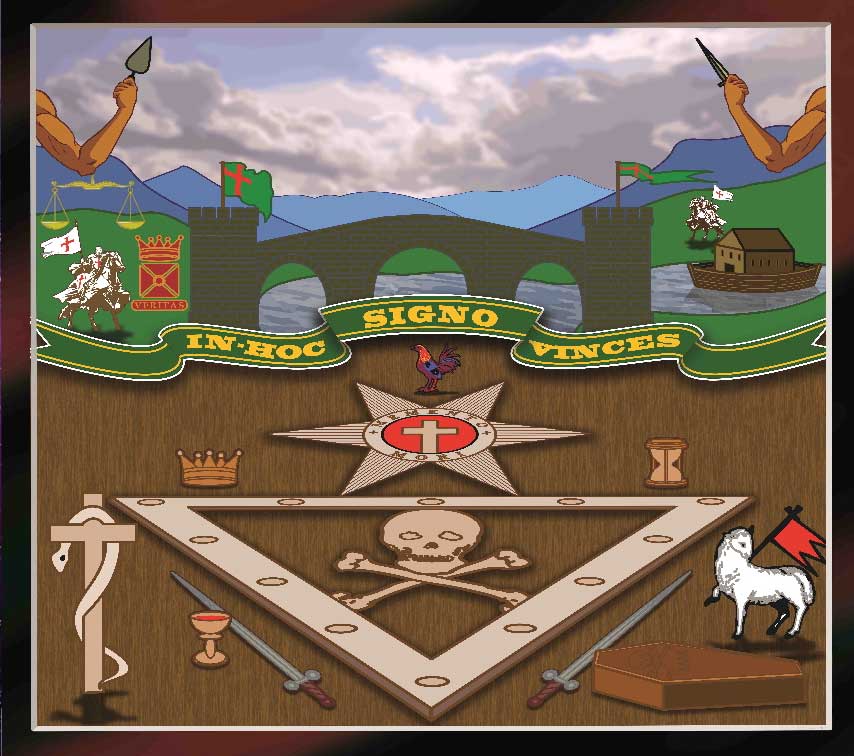 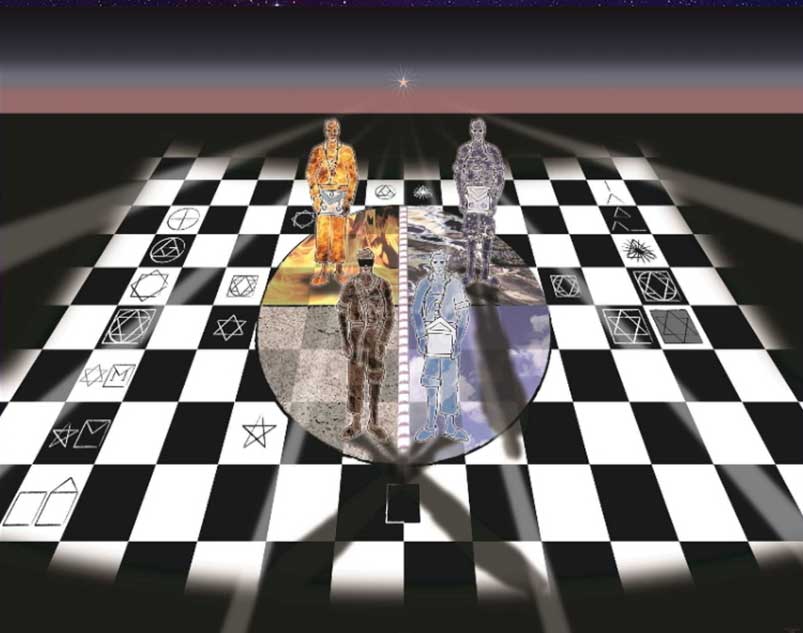 Tracing the discovery of the oldest Masonic Jewel. 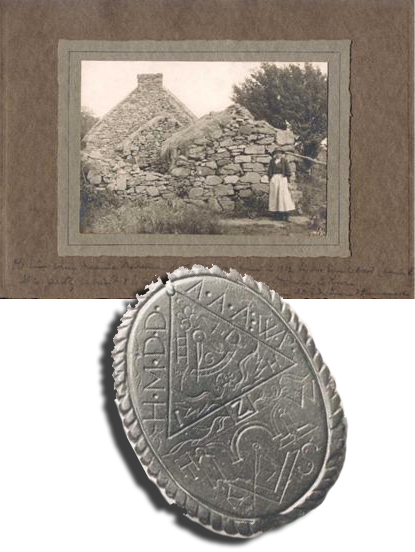 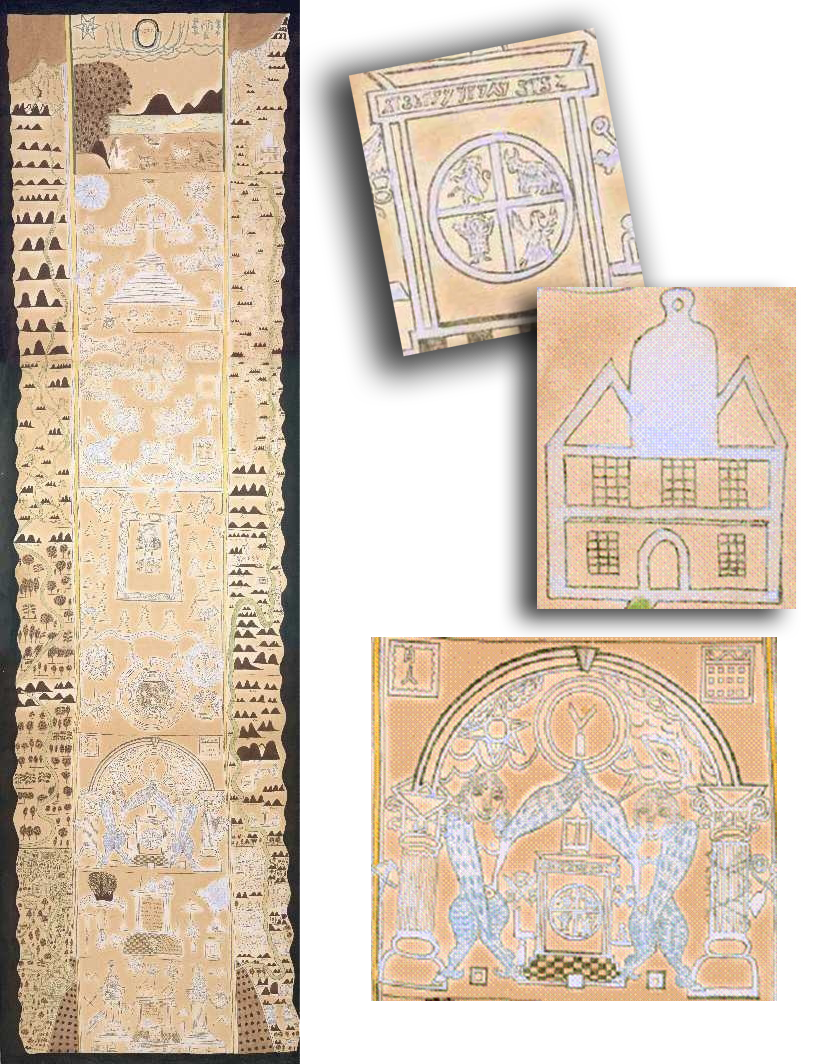 On the west wall of the temple of Lodge Kirkwall Kilwinning number 38 (two) in Orkney and is one of the oldest and most important Masonic artefacts in the world. Known as the Kirkwall scroll it is made of three pieces of strong linen (some suggest sailcloth) sewn together and hand painted throughout.

The complete hanging cloth is 18’6” long and 5’6” wide. It consists of a centre strip which contains around 100 Masonic symbols, and two outer strips which appear to be maps. The two outside strips appear to have come from the same piece of material and may well have been joined at one time.

The brethren of Lodge Kirkwall Kilwinning take excellent care of this ancient document. It is kept high on the west wall of the temple, protected from direct sunlight within the darkness of the temple and access to it is guarded from casual visitors, except for prior appointment.

The symbols up the centre strip seem to show the means of progression of the initiate from the degree of entered apprentice through to the rank of Sovereign Grand Inspector General.

The scroll contains many fascinating paths for the speculative mason and repays the time taken in its study many times over.
It is considered to contain the truth behind The All Seeing Eye along with the passage of The Arc of The Covenant and the Body of Jesus. Read The Article

Tracing More Words
Many Thanks Indeed For The Beautiful Enclose Years You Sent Recently. Your Items Have Brightened My Interest And I Hope To See More Of Your Work Before Long.” George Powers. M. A. (Supreme Council Of Ireland, 33 Degree)

“The Tracing Boards Are Stunning! It Is A Real Privilege For Me To Think That Something I Wrote Might Have Contributed, Even A Little Bit, To Such A Wonderful Work. Many Thanks Again For These Lovely Tracing Boards Tracing Boards.” W. Kirk. Mcnulty.

Author Of Tracing Boards And The Western Metaphysical Tradition”, Freemasonry-A Journey through Ritual And Symbol.”, “The Way Of The Craftsman: A Search for the Spiritual Essence of Craft Freemasonry”.